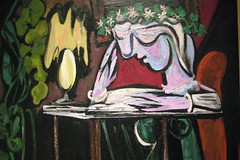 You can’t define magick as “stuff science doesn’t understand” because (1) it will shift as science advances, (2) it doesn’t convey the essence of magick to non-practitioners, and (3) it just sounds unprofessional.

I define magick as altering the physical world through thought.  Here’s why.

Why Define Magick as Thought Altering the Physical World

First, it’s close enough to the layman’s understanding of magick as words of power or rituals causing things to happen that you can ignore the distinction in casual conversation, or explain it in a simple sentence.

What About Altering Non-Physical Things?

I choose to focus on altering the physical world when I explain magick. It’s ultimately what most people care about. And it ensures everyone understands I mean “making changes in the world” rather than “changing my perception of the world.”

See Kristen’s comment for more details (she left it before I added this section).

What About The Application of True Will?

Crowley was a giant in the field of ritual magick. He added the ‘k’ to differentiate magick from stage magic. He defined magick as “The application of True Will.”

It’s useful for some ritual mages, but it doesn’t align to the layman’s definition. It will confuse non-mages.

Click here for more on why I don’t use Crowley’s definition.

My definition ignores precognition, psychic, and other information-based magick.  In a dictionary, I’d put those as the second definition.  Here, I didn’t want to muddy the primary definition by forcing them in.  Mea culpa.

Do you have another definition? Want to change something in mine? Leave a comment below.

This entry was posted on Wednesday, May 5th, 2010 at 2:32 PM and is filed under Uncategorized. You can follow any responses to this entry through the RSS 2.0 feed. You can leave a response, or trackback from your own site.