Yesterday was about activating a new mental area.  Today is about powering them so they stay active and work smoothly.

Why Hook Up Power

New mental areas will grab power on their own.  Within a few hours, new paths will open up to feed them.

But during that time, the new mental areas will draw power from wherever they can.  Other mental areas.  Your brain.  Wherever.

The energy drain is exhausting.  Work is impossible.  I slept several hours extra each day until I learned to activate the power paths.  My girlfriend had the same experience.

Where Magickal Power Comes From

Core paths aren’t passive.  They change the power’s signature as it approaches your mental areas.  Active core paths drive that work by absorbing a small percent of the power they’re channeling.  But unused, un-powered core paths shut down.

When I first found my core, I was looking at a mental area I’d just activated, seeing it trying to draw power, and thinking about where the power would come from.  Other mages I work with who found their core paths themselves were doing the same thing.  That’s how you should find your core, too*.

*If you work with a mage who can find his core easily, have him connect to your mental areas and show you your core.  It is easier than finding it yourself.  But it requires having a teacher on hand.

Having a visualization should help you find core.  I visualize core going up.  Power flows down into my mind like an IV drips saline into my arm.

A friend visualizes core going in.  Core is part of your mental areas like mitochondria are part of a cell.

They’re just visualizations.  Neither is entirely accurate.  Try both and see what feels natural to you.

Core divides as it goes from your source to your mental areas.  In computer science, this layout is called a tree: 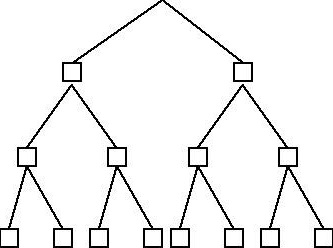 Your mental areas are at the bottom of the tree.  Your source is at the top.

If you pick two mental areas and trace their core paths, they will eventually meet.

This means that, if you trace up from the inactive core path for the mental area you just activated, it will eventually meet the path of an active mental area.  That core path will have power.  You can move power just like you move energy in your body.

Once you find that active part of core, grab some power and bring it down through the core paths to the new mental area.  Once the new core paths have power flowing through them, they will turn on and stay on.  If you start having difficulty bringing power to the next step in the core path, rest for half an hour to let the newly active core paths turn on more fully.

After activating a new mental area, reach up into its core until you find power.  Bring that power through core to the mental area.  Now it has its own power and won’t drain the power for the rest of your mind and body.

This entry was posted on Wednesday, June 2nd, 2010 at 5:27 PM and is filed under Advanced Conscious Magick. You can follow any responses to this entry through the RSS 2.0 feed. You can leave a response, or trackback from your own site.