Splendid! These kind of conversations are why I started blogging.

I want to talk about 2 things: Why I don’t trust magickal laws, and how understanding how connections are made leads to better techniques.

By the way, I say “connection” rather than “link.” I think they refer to the same thing, but I’m going to use my term just in case they don’t.

Why I Don’t Trust Laws

I don’t trust the Law of Similarity, the Law of Contagion, or the Law of Opposites. Because they’re not laws. They’re curiosity-stoppers, like phlogiston.

If you’re not sure what those laws are, read Ananael’s post, his explanations are great.

Here’s the thing: They’re not laws.

Gravity is a law. It doesn’t say “things fall.” It says 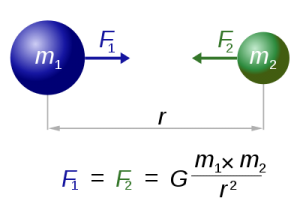 Without the equation, you’re not really explaining anything. If your law just says “Most things fall, but helium balloons don’t,” it’s just stating what you already know.

Laws without details are curiosity-stoppers. They make you comfortable with your lack of understanding, but they don’t eradicate your ignorance.

By the way, I love that Ananael made an operant equation. That’s what I’m reading next.

Ananael’s analysis of the Law of Opposites is spot on: It doesn’t tell you which things are “opposite,” and combined with the Law of Similarities, it basically says “everything affects everything,” which is useless.

But the same is true of “similar.” It’s not precise enough to make predictions or develop new techniques.

Ananael uses a photograph as an example. He’s right, photos are useful for making magickal connections. But why are current photos best, and an old photograph less so, and a digitally altered photo even less so? Same with a person’s voice: The more altered, the less link-able. Why?

And more importantly: How can we overcome that limitation, and use an altered photo for a good connection?

These questions aren’t rhetorical. Answers in the next section.

Calling it a law makes it sound like we know what’s going on. We don’t. That’s why I don’t trust laws without equations.

You Need the Moving Parts

So I made some connections, to mages and spirits I knew, people with normal photos, people with altered photos, etc. Then I made a second connection to that connection and followed it from me to them, to see all the steps.

Here’s what I found:

“System” is my term for any force you channel when you do magick, like what energy healers channel, or the force that responds to your rituals and affects events. They all share some common features, like responding to a standard word-based communication technique (it’s at the bottom of that post).

When I say I followed the connection to a system, I don’t mean I imagined a system between me and the person. I mean I made a second connection, moved it along the connection I’d established with the person, found a structure, and interacted with it to verify what it was.

If you ask a system what it does (“Requesting basic instructions”), it will tell you. That particular system makes connections based on the person’s energy signature (which I just call that their “signature”).

Next question: How do you get the person’s signature? My guess: Another system.

I made more connections, watching for systems connecting to my mind. Another system connected briefly each time I made the request. It connects to what you’re focusing on (pictures, voices, etc), finds out the person’s signature, and passes it to the other system to establish the connection.

But wait, there’s more. This system is event-based. Explaining it sounds awkward, but it’s connecting you to the person from the event of having the photo taken. Here’s how it works:

If you ask for “the person in this photo,” the system says “that photo has been altered, there is no person in the photo.” If you don’t specify the request, it appears this is the default.

But if you ask for “the person present at the event of this photo being taken,” then it figures out what you mean and adjusts for the alterations.

To get good connections via old or altered photos, refer to the event.

Time for a prediction.

Say you only have an old or altered photo of a person. If instead of just focusing on it during your ritual, you first make a connection like I described above, then focus on that connection as you do your ritual, your magick will work better.

Specifically, the system that responds to your ritual will use that connection, rather than trying to make its own. Since the default connection-making behavior fails in the case of altered photos, you are giving it a good connection where it otherwise wouldn’t have one, producing better results.

But wait, there’s more. Different kinds of magick require connections to different domains. A domain is a type of structure, like physical, mental, a person’s connections to various systems, etc. Healing magick needs a connection to the physical domain, banishing needs the magick domain (where their connections to systems, spirits, and other magickal structures live), and so on.

By default, these systems connect you to a person’s magick domain, except for connections based on their voice, which default to their physical domain. (No idea why, that’s just what it does).

So, if you make a connection using a picture (magick domain) and want to do energy healing (physical domain), the system handling your magick will need to transition that connection’s domain. That’s complex. So it will only get it partially right. That’s my guess for why magick is weaker when you use certain kinds of connections.

You could use this to say “Healing magick works better with a voice-based connection,” but that’s boring.

Instead, I say “Transition to the correct domain to make a better connection.” (Which will raise your L coefficient in Ananael’s equation). By shifting the small-scale signature of your magick-domain connection, you can trace to the person’s physical domain.

That transition is advanced. I had to practice each step before I could do the whole thing. But it’s optional, and you should get good results with a solid connection to the person, even in the wrong domain. (Your system should shift to the right domain for you).

So, here’s my prediction for maximal magick success:

Try it out, let me know how it works. If you need details on any step, leave a comment.

Some other thoughts while reading Ananael’s post that didn’t fit anywhere:

The hoodoo trick of connecting to a physical object, then putting it somewhere the person will connect to, is very cool. I’ve done this with jewelry, sinking connections in to enchant a pendant, so I can connect to the person’s physical domain easily (for protection). It works well.

There’s a difference between using a connection to send your own energy (only a fraction goes through) and using it to alter their structures (works well). Why? I could say “connections have resistance,” but that doesn’t explain anything more than saying “energy only has a fraction of its power over a connection.” The real answer gets into the difference between energy and activation, which is a whole post unto itself.

@Barrabbas (in Ananael’s comments): Connections based on symbols use the same systems I covered, and their goal is to connect you to a third system associated with the ritual style that symbol belongs to (the “symbol’s system”). The first system gets the signature of the symbol’s system, and either gives you that signature, or gives it to the system that makes connections, which connects you to that system. Once you know the system’s signature, you can just use the second system, skipping the symbol-to-signature step.

This entry was posted on Wednesday, June 8th, 2011 at 11:06 AM and is filed under Ritual Magick. You can follow any responses to this entry through the RSS 2.0 feed. You can leave a response, or trackback from your own site.