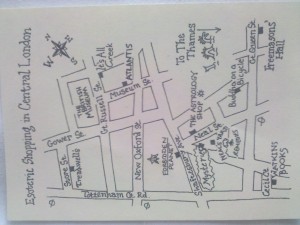 The shops hand out this map. No idea why it's sideways. Click for full size.

Saturday I followed this walking tour of London’s occult shops. Some were great, some not so much. Here’s some notes on each:

Unsworth Rice and Coe: I think it’s closed. There was another small bookstore in that area. I skipped it.

Atlantis Bookshop: Very cool. Small store, good variety of books, and a noticeable lack of fluff. Staff are folks you’d want to hang out with, and I think they’ve read the entire collection. Apparently, Crowley, Gardner and other big names hung out there back in the day. I’ll be back Wednesday for a pub moot (the UK version of a meetup).

Masonic Lodge: They have tours during the week, but it was mostly closed up on Saturday. Kind of neat, but not enough to get me to come back.

New World Aurora: It’s an essential oils / aromatherapy shop now. Same kind of stuff you find in the states. I walked in and straight back out.

Mysteries: Crystals and tarot. The kind of shop you find in the states. Not my thing. (If you’re a regular reader, probably not your thing, either). Sadly, this was the busiest shop.

Watkins: Feels like an occult Borders. Tons of books, great range of subjects, but no socializing. I didn’t stay long, but the staff was friendly. A good place for books, though.

Treadwells: A guy at Watkins recommended Treadwells for events, so I skipped the last few shops on the site’s tour and went there. Another smaller store with a good selection of non-fluff books (like Atlantis). You can hang out and read (don’t chase you away), and they have the greatest variety of events. The owner is a college professor (religion or something occult-related, I think). Also, it’s moved, see the map above for the new location.

From explaining direct magick many times, I have the pattern down now:

Atlantis and Treadwells were the most worthwhile for me. We just don’t have shops like that in Albuquerque. (NYC doesn’t seem to either. The only one I know of in the states is The Occult Bookstore in Chicago). If I were doing it again, I’d visit those 2 shops, plus the British Museum in the middle. If you want magick books, add Watkins to the list.

Also, I asked each of those bookstores if they had anything on direct magick. None did. So I may be writing a book at some point. Any thoughts on what to put in? Leave a comment.

This entry was posted on Monday, July 11th, 2011 at 11:37 AM and is filed under Personal Stories. You can follow any responses to this entry through the RSS 2.0 feed. You can leave a response, or trackback from your own site.

2 Responses to “Occult Tour of London”