This is part of An Initiation into Direct Magick – Book 1.

There are hundreds of forces you can channel: Chaos Magick’s egregores, Reiki’s “The Universe”, unnamed forces that respond to Hermetic (and other) rituals, sources of psychic information, and other forces built by spirits to handle communication, manifesting, and other tasks. In Direct Magick, we call all those forces ethereal software.

To keep this quickstart guide simple, we’re focusing on one piece of ethereal software. It’s designed to behave like most other software, so the techniques you learn here will apply to other forces you might want to use. This chapter will show you how to connect to it, and an easy way to send it your intent.

Also, a special thank you to the twenty-some readers who helped me test the software. You guys rock!

(Write-up of that test: magickofthought.com/2012/07/help-beta-test-my-ethereal-software/) 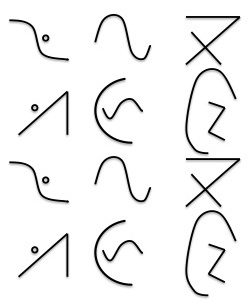 on the sigil on the opposite page for 15-60 seconds. The whole thing is one sigil — each symbol that makes it up is independently bound to the ethereal software, then combined into the sigil for redundancy. There’s no particular technique to looking at the sigil, but focus on it, don’t just glance at it.

(Focusing for longer won’t do any harm, but shouldn’t be necessary.)

The software will connect to you, but it will wait for a command before doing anything else. You may not even notice the connection, especially if you’re new to magick. That’s fine. We’ll teach you some commands in a minute.

Incidentally, most ethereal software works the same way. Focus on a sigil from the Golden Dawn, OTO, or Reiki, and that system’s ethereal software will connect to you. Whether you can command it is another question entirely — this book’s software is designed to allow anyone to work with it, while other systems typically require initiation. But connecting to ethereal software seems pretty universal.

For experienced mages: Once you notice the software’s connections, pay attention to how they feel. That’s the software’s signature. Think of a name (like “Direct Magick Software”), and mentally associate the signature with that name. Later on, you can connect to the software by thinking of its name and signature, without looking at the sigil.

Aside: How Do Sigils Work?

(Asides are extra information I find interesting. I think you might, too. But they’re not required for the quickstart, so feel free to skip them.)

I’ve always been puzzled by sigils. I mean, if I meet someone in person, or touch an object they held, it’s not surprising that one of these forces might connect to me. But how can looking at lines on a computer screen do anything?

So I stared at some sigils, watching for magickal connections. I noticed two distinct forces, with two distinct signatures. The second force was the ethereal software associated with the sigil, the one I expected to connect. But the first force was a surprise.

That first force was the same no matter which sigil I looked at. Golden Dawn, Reiki, Enochian, others. The force was always the same, with the same signature.

So I did what Direct Mages do: I connected to that force and told it, “Give me your usage instructions.” It explained that it notices when a person is looking at a symbol and connects them to the symbol’s ethereal software. It’s like Google for magickal forces. (For my fellow computer geeks, it’s closer to DNS.)

I used that Google-force when I made the sigil for this book’s ethereal software. I told it, “Associate the sigil I’m looking at with this ethereal software I’m connected to.” It told me the command was successful, but I had doubts. How could it notice if someone I’ve never met stared at similar-looking lines? (I still have no idea, by the way.) And what if there was a step I missed? Other systems of magick use rituals to bind sigils — no one would expect a single command, done in 10 seconds, to be successful.

So I tested it. I posted the sigil on my blog. Readers focused on it. They’d never met me, and never connected to my ethereal software before. Their only link was the sigil.

It worked. Experienced mages overwhelmingly got positive results, and many notices got good results, too. That one command had bound the force to that sigil.

(You can also bind ethereal software to a ritual, so anyone performing the ritual gets contacted by the software. I suspect that works in the same way, but I haven’t done it myself, so I’m fuzzier on the details.)

Once you connect to the ethereal software, you’ll want to send it your intent: “Make me successful in finding a job,” “Heal this person,” and so on. There are lots of ways to send your intent. We’re going to learn two in this book.

Aside: Why Learn Other Communication Methods?

This method is so easy. Why learn anything else?

Because this method puts 100% of the work on the ethereal software. It has to figure out how your mind works, then read your thoughts. What’s easy for you is hard for the software.

This method also tends to be imprecise, like talking on a phone with static. It works for simple phrases, which is all we need for now. Later in this book, we’ll learn another method that lets us communicate details more clearly.

For experienced mages: Do whatever you normally do to send out your intent. This book’s ethereal software should be programmed with all the normal methods of communication, and they should work better than the extremely simple method we just discussed.

(But remember, the forces you normally use have had time to learn their way around your mind. This force hasn’t had that time, so for now, keep your commands simple, and follow the exercises in the next few chapters.)

Success: How to Know You Did it Right

I like to end each exercise with a self-test, so you can verify it’s working for you.

Congratulations! You just did your first bit of Direct Magick.

My readers helped me test this on my blog. About 3/4 of them noticed the obvious connection, including quite a few people new to magick. About 1/4 did not notice anything, and most of them were new to magick. It’s common for novices to not feel connections or energy, so if you don’t feel anything, that’s OK. Just continue with the exercises, and return to this test in a few weeks.

Aside: Magick and Placebo

Let’s say you’re in the 3/4 of people who feel this. How can you be sure you were feeling connections and not placebo?

First, I don’t want to over-promise. This chapter isn’t about convincing hardcore skeptics that magick is real. That’s a bit much to expect from a novice mage (that’s you) or a short book. But let’s see what we can do to decrease the likelihood that you’re feeling placebo, so you can be more confident in your magick.

Instead of creating the sensations in yourself, let’s create them in a friend. Get a friend who’s also interested in magick. Give them this book. Have them practice until they can each feel the obvious connections, too.

Then get together. Both of you look at the sigil, then have your friend close their eyes. Touch them and think, “Give them an obvious connection.” Verify that they feel it.

Now, the control condition: Repeat that, except sometimes, touch them but don’t think anything. Verify that they do not feel the connection when you don’t ask for it. (And make sure not to change your breathing or touch, or do anything else like that.)

See what happens. Don’t expect 100% accuracy — nobody is perfect, and sometimes your friend will anticipate the connection, or be distracted and not notice it. But when I do tests like this, I’m impressed with the results, and I think you will be too.

What if your friends aren’t interested in magick? Then do the exercise solo, and be proud that you’re testing your results as best as you can right now. We’ll have more tests soon.

Whenever you’re doing magick, it’s a good idea to disconnect from ethereal software when you’re done. If you don’t, the connections and energy may cause a headache.

This book’s software is designed to be easy for beginners to use. By default, it will disconnect from you once you ignore it for around 30 seconds.

If you’re working with other ethereal software, perhaps from other systems of magick, you may have to choose to disconnect. For example, thinking, “I’m done with magick for now.” You can use that command with this book’s ethereal software, too.

What if you do some magick, then think for a minute, then want to do more magick? Won’t the ethereal software disconnect from you?

As long as you’re thinking about magick, your mind will probably keep the software engaged. Also, when you focus on the sigil again, the software will re-connect. So this shouldn’t be a problem.

Aside: What If You Don’t Disconnect?

What if you’re using some other ethereal software, perhaps from another system of magick, and it doesn’t automatically disconnect? What happens?

Like most errors when working with energy, the worst case is a headache. If that happens, just disconnect from the forces, and rest. You should feel better in around an hour.

If you know how to work with energy, you can heal yourself in a few minutes. First, release the energy in your body, then build new energy with an energy meditation. (We’ll cover that soon.)

“Hold on,” you may be saying. “I got a headache from too much energy. Now you want me to fix it by building more energy? Won’t that make it worse?”

The amount of energy doesn’t actually matter. What matters is the energy signature, or type. Energy influences your body, and the wrong type of energy will make you feel off. After releasing the energy, we replace it with new energy, which will have your body’s normal signature. This helps get everything back to normal faster, and works better than just releasing the energy.

This entry was posted on Wednesday, January 22nd, 2014 at 5:19 PM and is filed under Initiation - Book 1. You can follow any responses to this entry through the RSS 2.0 feed. You can leave a response, or trackback from your own site.