Imagine one nerve cell. Above it are ethereal structures. Tubes, or pathways, coming out of the cell Each time the nerve fires, it creates some biofield energy, which these ethereal pathways carry to the person’s aura. When we do healing work, we put energy in the aura, letting it filter down through those pathways to the cells. Advanced healing techniques act on the pathways themselves, helping the energy reach the cells more quickly, powerfully, and precisely.

Now imagine a chain of nerve cells, all in a line, carrying a signal from the hand to the brain. Each nerve has its own ethereal pathways leading to its own piece of the person’s aura. That’s two dimensions: Horizontal is the chain of nerves, and vertical is the ethereal structures leading to the aura. Like a picture in a magazine.

And what if we want to work with all the nerves throughout the person’s body? That’s when we need four dimensions. Here’s why:

There are nerves throughout the body, so you need three dimensions for the physical nerves. Then each nerve has its own ethereal pathways leading to the aura. Except here, the ethereal pathways can’t be “up.” Up is already used — up from my bicep is either my deltoid (going up the arm), or my skin (going out). Either way, the ethereal structures can’t be there, because my deltoid and my skin have their own ethereal structures. 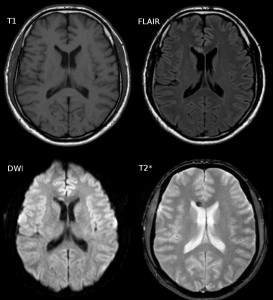 To visualize this, think of a brain scan. As the scan sweeps through the brain, it presents slices — 2D images that add up to the 3D brain. To visualize a 4D ethereal structure, you would have a series of 3D slices. The first would show the ethereal structures immediately touching the person’s cells, then the next would move a bit along those paths, then a bit farther, until you’re at the person’s aura. (For anyone doing this: Look for spots where the ethereal pathways split or quickly change signatures. These makes excellent points for 3D slices.)

Lost? Here’s an excellent video explaining the fourth dimension in a video game.

I first thought about 4D magick as a teen, for visualizing energy healing (probably). It wasn’t terribly useful. Remember, visualizations only communicate intent to your unconscious mind, then let the unconscious handle the details. The added details of 4D didn’t help my unconscious, and the added complexity probably detracted from my results. If you’re visualizing, just use a good representation, a 2D body with ethereal structures rising out of it. Keep it simple.

We all know about sending energy along a connection. A sensory connection is when you make a connection but don’t send energy along it. Instead, let it absorb a bit of energy from whatever it’s connect to, not enough to drain anyone, just enough to feel the energy signature there. Now it’s sensing that signature.

For practical healing techniques, I make a network of sensory connections throughout the body, to each group of cell’s ethereal pathways, then another set of connections a little bit out along those pathways, and another set of connections farther up, until we reach the aura. It’s like the brain scan, taking a snapshot at each point along those paths. And since each snapshot is a 3D body, the overall map is 4D. That’s what I use to guide my energy healing.

I’ve used this for energy healing, for awakening ethereal muscles, and this week I’m using it for creating sensations. I’ll give some examples of working in four dimensions next week.

(You may have noticed, this is 4 dimensions in the mathematical sense, not as in “beings from another dimension.” Yes, I sneakily taught you math. Mea culpa.)

This entry was posted on Sunday, July 19th, 2015 at 5:13 PM and is filed under Advanced Conscious Magick. You can follow any responses to this entry through the RSS 2.0 feed. You can leave a response, or trackback from your own site.