Building a Company: The Dreamer’s We 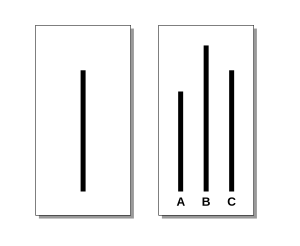 In 1951, Solomon Asch did a now-famous study on conformity. Eight people were asked, “Tell me which of the lines, A B or C, is the same length as the reference line.” Except 7 of those 8 people were part of the experiment. They confidently lied, saying the answer was B. And 36% of subjects went along, agreeing with the crowd instead of their own vision.

In advocating for magick and biofield healing, we are all part of an Asch conformity experiment.

But there’s a second result, less-known but just as powerful: If a single other person disagreed with the mob, subjects trusted their vision and spoke their truth. Humans don’t need to be a majority, we just can’t be alone.

As I start Healing Lab, I find myself saying, “We’re developing new healing techniques. We’re preparing for double-blind studies.” But who is this we? Right now, Healing Lab is just me.

It isn’t the royal we, where a king sweeps his subjects into his pronoun. I don’t have subjects. And if Healing Lab were five people, saying “we” would be correct.

(It also isn’t the manager’s we, which means you, as in, “We need to update the spreadsheet.”)

I’m calling this the “dreamer’s we.” Speaking for the organization I’ll build one day, rather than the organization I have now. Like having that ally in Asch’s conformity experiment, this “we” makes it easier to trust my vision and speak my truth.

What would you do with the support of a team? How much of that can you do today?

This entry was posted on Monday, December 21st, 2015 at 8:47 PM and is filed under Business. You can follow any responses to this entry through the RSS 2.0 feed. You can leave a response, or trackback from your own site.

2 Responses to “Building a Company: The Dreamer’s We”