Where did spirits come from?

I think spirits must have evolved. But it raises a few questions:

(Not that I think spirits are evidence for aliens. And I hesitated to mention the possibility because I don’t want to be associated with people fascinated by UFOs. But when you’re exploring possibilities, you can’t discard one simply because some people have irrationally latched onto some aspects of it.)

The Evolution of Magick

Abilities evolve only if they are incrementally useful.

To evolve from blindness to eyesight, seeing a little has to be useful. (It is, for orienting to sunlight while underwater). Same for a little speaking (for instructions while hunting), a little running, a little chewing, and so on.

But magick isn’t very useful until you’re quite good at it. A little energy work doesn’t heal very much, or defend against predators. So how did it evolve?

The same way as calculus.

Cavemen didn’t need the ability to do calculus. That level of abstract reasoning would have been useless.

But every caveman needed to understand hunting plans. That level of abstract reasoning was absolutely vital.

Abilities are distributed unevenly. Some people are better, some are worse. There’s a mean and a bell curve. 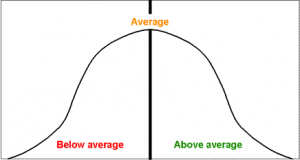 If the mean of the curve is the minimal level necessary for survival, then half the population would be unable to function. Basic skills must have a mean higher than necessary in order for everyone to have the basic level. Most of the population will be better than is necessary for survival. If being better at that skill is an advantage, evolution will raise the overall level of that ability.

This is the main evolutionary theory for abstract reasoning powerful enough for calculus. And I think it’s also how magick evolved.

Energy facilitates social interactions. Even in non-mages, it communicates emotions, status, and helps people connect and bond. Think about the energy shared by a loving family, and the bond it makes. Or the energy unconsciously used by some salesmen and politicians to sway people.

Using energy to influence people around you, even a little bit, would have been an evolutionary advantage. Advantages become pervasive, spreading to everyone in the tribe over generations. And once everyone else in your tribe uses energy, you also need to in order to understand the social hierarchy. To social animals, understanding that hierarchy is as vital as hunting. Energy becomes necessary.

And as with any necessary thing, the average ability is much higher. Those with above-average ability could influence people better, just like the politician or salesman. That advantage drives the average even higher, until you get conscious influence of energy and, eventually, magick.